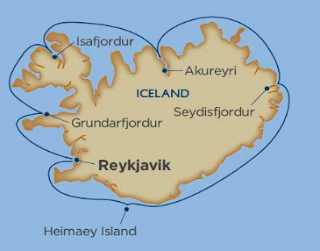 Iceland was always in my bucket list.  Every year for the past three or four I always waited too long.  First, I wanted to get to a few ports by cruise, then I thought about a fly/drive there and hit the highlights on the ring road around the island.  Then Windstar came out with a lovely yacht cruise that hit all the places I wanted to see:  Reykjavik, Heimaey Island, Seydisfjordur, Akureyri, Isafjordur, Grundarfjordur, and back to the capital Reykjavik.  It was perfect.  A lovely yacht, great food, wonderful crew, and a tiny passenger list! After landing in Reykjavik, we were hustled off to the yacht and off to our first port, Heimaey Island, off the south coast of Iceland.  The photo to the left shows golfers enjoying a warm Iceland day (it was about 50F, a heat wave in Iceland!).  In 1973 they had a horrific volcano eruption.  The tour guide told us he was 14 and living there.  He and his parents left in a hurry... the boat captain told them the boat engine was water cooled and there was a problem:  the water was boiling in the ocean.  Just imagine the terror.  A few years later, he snuck back to the town with a pal and he found his old house.  We drove past the house during our tour.  Much of the island was covered in lava and the locals tried to hide it with grass. 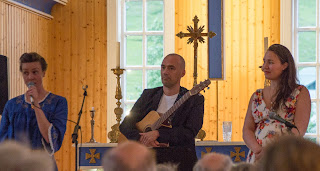 Heading to the far east end of Iceland, we land in Seydisfjordur.  We went to this lovely blue church and heard a trio sing traditional Icelandic songs that were sung to children.. things like "we're coming to your house at night to eat your children."  Seriously.  Iceland is a land of trolls, giants, and monsters that come out at night. 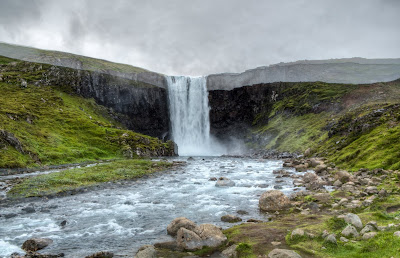 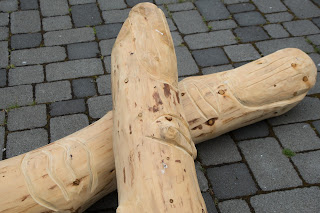 We also visited the home of Gunnar Gunnarson, one of Iceland's great writers.  By the way, Iceland is one of those rare countries where there are no family sur names.  For instance, if I had a son and named him Fred, his name would be Fred Jamesson.  If you look in the Reykjavik phone book, the names are sorted by first name.  Seen here are giant fingers at the Gunnarson residence.  There were also a number of tree stumps.  A caretaker at the residence asked me if I knew what they were.  I thought... hmmm, grave markers?  Nope.  They showed the various ear markings on sheep so sheep owners could prove who owned what. 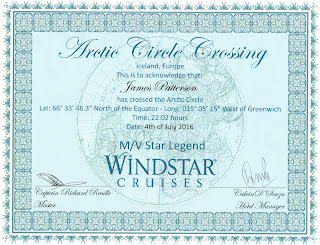 Now on to the lovely little city of Akureyri, located on Iceland's north coast.  It was on the way to Akureyri, at 10:02pm on the 4th of July, that we crossed the Arctic Circle and I have proof!  As sunset was at something like 12:30am (sunrise was around 4am), I was on deck in bright sunlight to see us cross the invisible line. 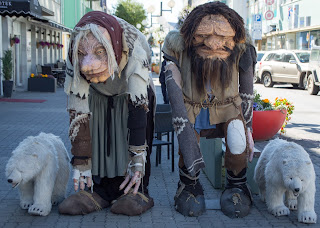 The very walkable town of Akureyri loves their trolls!

If you go to Iceland, you'd better like waterfalls.  Here's one in the Akureyri area called Godafoss. 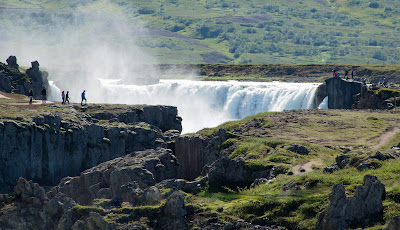 Isafjordur is in the northeast part of the island.  I went to the Arctic Fox Centre, which protects and rescues the only native mammal.  We also visited a little village of Sudavik, and then the Alftafjordur fjord.

Our final stop before returning to Reykjavik is Grundarfjordur on the far west coast of Iceland. 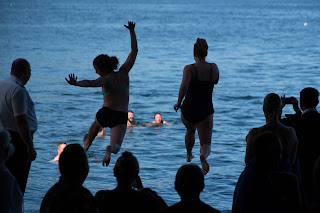 On the yacht, some jumped into the cold water.. the Arctic plunge.  Captain Richard Reville supervises (on the left).

Here's a look at the coastline around Grundarfjordur, followed by more area waterfalls. 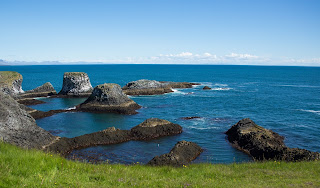 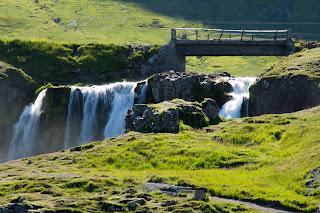 Back in Reykjavik, we had a lovely tour called the Golden Circle.  We visited a gyser, waterfalls, and yet more coastal scenery. 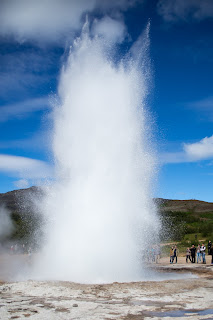 Here's the geyser that goes off about every seven minutes.  The guide said most people miss the first spurt, then normally get it after two or three.  I was lucky and got this guy the first time.

I now feel confident I could return, this time renting a car and driving around the ring road, maybe doing bed and breakfasts along the way.  Iceland has slowly become a tourist magnet, so you'd better get there quickly.

Another interesting thing to note is hot water from geysers pretty much heats most of Iceland and provides steam generated power for the island.  Although a can of beer may cost around $12 U.S. dollars, the electricity and heat is cheap.