Arriving in Tallinn, Estonia after a very long trip from Phoenix, what do I see out of the bus window on the way to the hotel but… a Circle K!  Circle K is based in the Phoenix area.  By the time the trip was over, I’d discover Circle K is all over the Baltics and Poland.  They have hot dogs (Kielbasa) and sell gas too, just like in the USA.  Their stores over there seem cleaner, too. 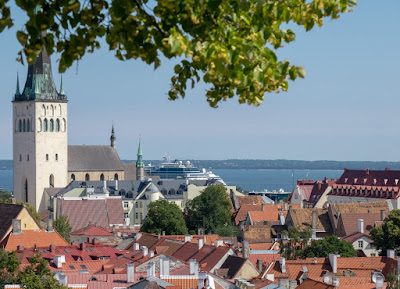 Tallinn in the northern most capital in the Baltics.  Being just south of Finland, they identify most with the Finns.  The languages are also similar.  Estonians say they can understand Finnish a lot better than the Finns can understand Estonian.  To be in any European country means seeing a lot of castles, churches, and old towns.  Tallinn is no exception.  It is also a popular port for cruise ships.  We went to the Song Festival grounds and the photo I have of that shows workers tearing down equipment after a concert.  But this was an important site for protesting Soviet rule.  Between 1987 and 1991, this was a place Estonians sang nationalist songs in protest, the so called Singing Revolution.  And on 23 August 1989, over two million people from Estonia, Latvia, and Lithuania joined hands in protest of Soviet rule in something called The Baltic Way.

At this point, I should add I’m not just a dispassionate traveller to the Baltics.  This trip was special because my grandparents on my mother’s side were from Lithuania.  I can tell you the pain these little Baltic countries went through with the Nazi’s and then the Soviets.  In our family, we gave up trying to communicate with relatives in Lithuania in the mid-60s as we found they were not receiving money and clothing we were sending.  I’d love to send our American socialists to these countries, and to Poland, to see the devastating effects of socialism.  In these countries, their history is never far from the surface.

The second Baltic capital to visit was Riga, Latvia, on the mouth of the Daugava River, also called “the Little Paris of the North.”  Riga’s central market is filled with goods from all over the Baltics.  We quickly saw Riga Castle, St. Jacobs Cathedral and St. Peter’s Church. 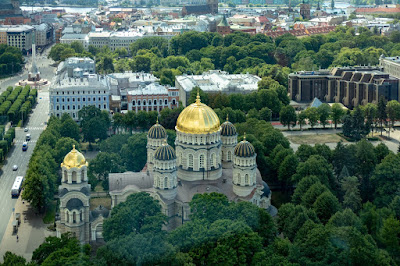 The next day we travelled to Vilnius, capital of Lithuania.  My information is sketchy about exactly where my grandparents were from.  I knew my grandfather was from the western part of Lithuania, in what at the time was Prussia (Germany).  My grandmother talked about living on a farm somewhere between Kaunas and Vilnius.  I spent a lot of time wondering… did my grandmother walk these streets?  Was she here? 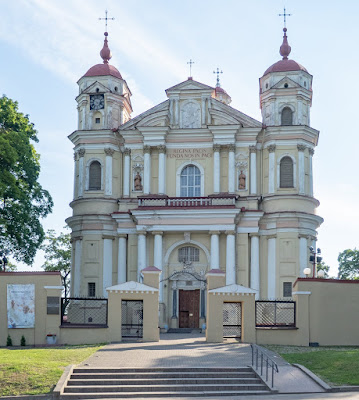 The Germans, then the Soviets, were particularly cruel to Lithuanians.  I had a chance to visit the KGB Museum (also former Gestapo headquarters) and walked where Lithuanians were tortured and killed.  As I said earlier, their history of being brutalized is never far from the surface. 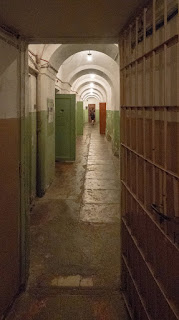 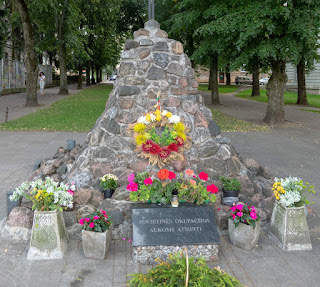 In Vilnius, we visited St. Peter and St. Paul, St. Anna’s church, Vilnius University, Gediminas Tower, and Vilnius Castle.  Later in the afternoon we visited the red bricked Trakai Castle on gale Lake.  I have memories of my grandparents having a painting of this castle.  One of the regrets I have is that I didn’t ask more questions of them.  Back in the 60s, the thinking was that I was to focus on English only.  Lithuanian was something they talked over my head.  And there was little talk of the old country.  I remarked at one point on this trip that I recognized the language, not the words, but the cadence of it.  I’d turn, and see young people speaking.  For me, Lithuanian and Polish were languages old people spoke.  Just an “ah ha” moment.  I’ll share another story.  Around the corner of the hotel was a street filled with outdoor cafes.  While eating dinner, I wanted to order a local beer called Svyturys.  I asked for it reading the name from a sign like an American.  My pronunciation wasn’t even close.  Lithuanian is, to this American, a very strange language.

Once again we hit the road, this time our destination is Warsaw Poland.  We stop for a break just over the border from Lithuania into Poland.  The bus driver Robert, who is Polish, told me to look at the license plates of the cars in the shopping area.  Most were from Lithuania.  He said that was because the Euro from Lithuania made shopping much cheaper for them in Poland.  Poland still does not have a strong enough economy to use the Euro; they use the Zloty instead.  I went to an ATM and forgot the exchange rate.  I took out 3,000 Zlotys.  I asked the concierge of the hotel how much this was in U.S. dollars.  Ha, it was worth over $800, a bit more than I wanted to take out. 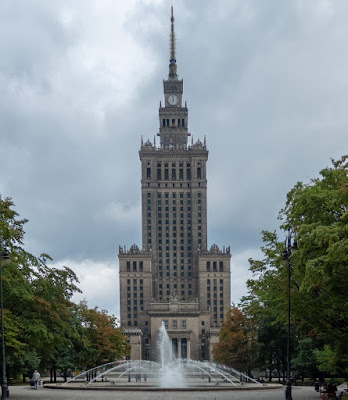 Once we arrived in Warsaw we saw a gaudy large building next to the hotel.  The locals call this “Stalin’s Birthday Cake.”  This was a “gift” from Stalin most locals could have done without.  Most in Warsaw hate the building but it is so large it would create many problems to tear down.  Seconds after taking a photo of this massive building, it rained.  And rained HARD.  I was totally soaked and on the way back to the hotel found a local cafe where I had some pasta and a local Polish beer. 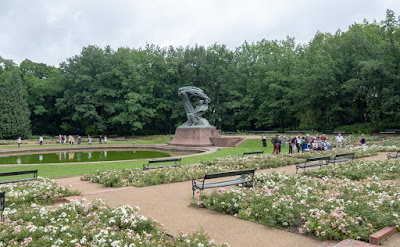 The next morning included a visit to a park dedicated to the composer Frederic Chopin.  We also visited the site of the Warsaw ghetto, the Cathedral of St. John, and the Royal Castle, which was restored after destruction in World War II.   Later in the afternoon included a visit to Wilanow Palace. 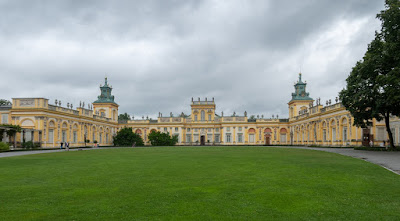 Sunday we headed toward Krakow, but first stopped at Czestochowa and the Pauline monastery of Jasna Gora, home of the Black Madonna painting.  Millions of pilgrims come to visit the shrine to the Virgin Mary.  I think at least a million people were there this particular Sunday.  In a fast pass-through, I was able to get a few photographs of the painting.  Our tour guide through the monastery was a priest who was actually pretty funny.  He said, “Many ask how we make holy water… we boil the hell out of it!” 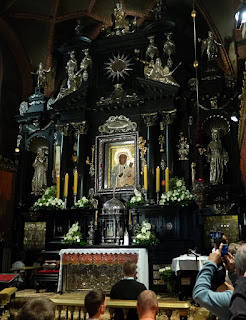 The Polish city of Oswiecim may not mean anything to you.  But the nearby Nazi death camp of Auschwitz might.  You’ve all seen this place in photographs.  To be there in person is hard to express in words.  It has left a mental mark. 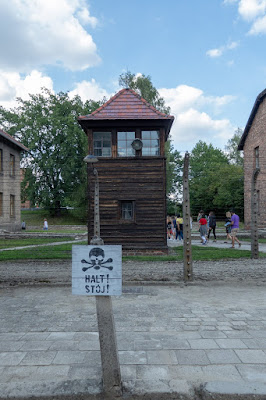 The final city stop was Krakow.  Of course there is a castle and cathedral to visit.  And a market square in their old town.  There is quite a rivalry between Warsaw and Krakow.  A cab driver said Krakow was best, more laid back.  Warsaw was for politics and making money. 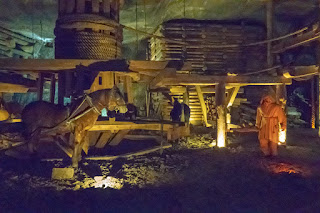 The final tour was to the Wieliczka Salt Mine, where we went down close to 1,000 feet.  Salt, before refrigeration, was a valuable commodity.  Some say as valuable as silver.  It’s because salt was used to preserve foods. 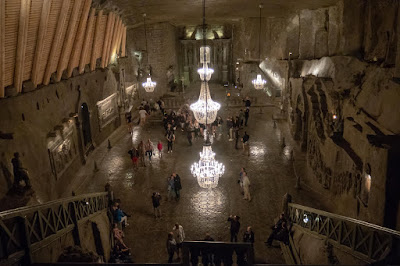 After twelve days of racing through three Baltic countries and Poland, it is time for me to take a vacation from my vacation!

See all of my photos, including a few statues of the Polish Pope, John Paul II

Posted by James Gordon Patterson at Monday, July 23, 2018 No comments: