New Zealand May 2010: Auckland to Queenstown to Christchurch

New Zealand in May presented a host of challenges in photographing its beauty.  It is winter there now; so even during mid-day it was on the darkish side.  I’ve never been a fan of cold weather, so that was another challenge.

People have asked me, “Why New Zealand?”  Hey, why not!  Qantas Airways had a sale on tickets, the time was right, and I’ve never been there.  So why not?
New Zealand is about twelve hours flight time from Los Angeles.  That time on the airplane for me is spent watching movies.  I think I watched three on the way out, haha.  Plus several television documentaries.  They feed you dinner and breakfast and snacks and drinks.  Beer is free, thank you very much.  I try to sleep , but I’m pretty excited to see New Zealand.  We are headed to the largest city of Auckland, with a population of over one million.  Not a big city using USA standards, but there are only four million people in all of New Zealand.  So Auckland is made up of a quarter of the population.
Four million people... and 32 million sheep.  And soon I would see this up close! 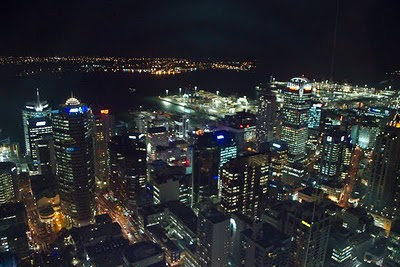 First thing I notice, being from Arizona, is New Zealand immigration asks for my papers!  I didn’t realize other countries actually do that.  It was no worries for me as I quickly showed my passport.
Auckland is on the north end of the north island.  New Zealand is made up of the north and south islands.  The north island is a bit warmer as this is south of the equator.  I learned many Kiwis, as they are called, move to the warmer north island as do others from the British Commonwealth.  One ad in the local paper had a headline, “Don’t be a ping pong pom!”  I learned that meant that British citizens sometimes move to New Zealand and then move back.  A “pom” refers to a Brit.  The story I got was a POM (or POHM) meant “Property of His/Her Majesty” and referred to prisoners sent to Australia from Britain.
One of the main attractions in Auckland is the Sky Tower and that gave me good up high views of the city.  In one night shot, you will notice a cable that goes up and down on the right side of the photo.  Professionals bungee jump from the top of the Sky Tower on that thing.  It scared the #$%$ out of me the first time I saw somebody leap over the top of the tower past me.  Somebody came up and said, “no worries, mate.. just a jumper.”  Yeah, I figured that one out.  Wish I was able to get a photo of that but they jump so fast and with little warning.
Then off we went to the Auckland airport to fly to Queenstown, a small city of about 15,000 in the southern part of the South Island.  It’s a resort town in both summer and winter.  Skiing in the winter, but the ski season was just a week or so away.  Here is where they filmed Lord of the Rings, so the scenery was spectacular.  A planned flight to Milford Sound was cancelled however because of poor weather conditions.  One of the young ladies at the hotel said to me, “so sorry your flight was cancelled; you don’t want to get weeet.”  I thought she said “you don’t want to get weird” so I asked her again.  She said, “oh it’s my twang; I meant you don’t want to get wet” overpronouncing “wet” so this American could understand her.  Getting “eeeeegs and bacon” in the morning also took a bit of getting used to.  Queenstown is surrounded by the Remarkables Mountain Range.  As you can see, we had a lot of cloud cover and snow all over those mountains.  The town is on Lake Wakitipu, very cold water now but in the summer it is filled with anything that can float.  Taking the steamer Earnslaw over the lake, we head to a sheep station on the far side.  And oh do they have sheep.  New Zealand has been hard hit by the downturn in wool and mutton demand.   Another experience we had was the ride up the gondola to the top of a mountain that gave great high views of Queenstown. 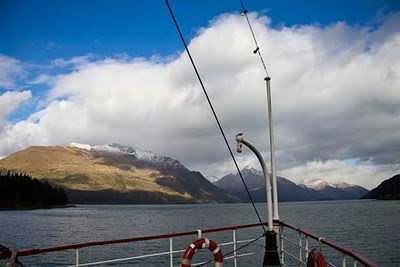 Then it was off for Christchurch, further north on the south island, over the mountains by bus with a stop at Mount Cook.  Christchurch is New Zealand’s second city with about 400,000 people.
Mount Cook in the Southern Alps is not really that high as far as mountains go.  It’s 3754 meters or 12,316 feet above sea level.  But the whole area was blanketed in snow.  For an Arizonan, it was fun to see.  Photographing was a difficult challenge though.  Some of the photos look like I took them in black and white because about all you could see was black... and white.  One interesting site along the way was this little stone church.  While walking around taking shots, I ran into an Australian gent who told me he got married there 25 years ago and he and his wife had gone back to take a look.  And, sure enough we see a wedding party walk out toward the shoreline of the lake.  I was able to get a photo of them from a distance. 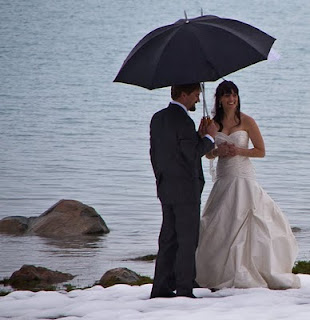 After a bus trip of about 12 hours with lots of stops, we finally made it to Christchurch.  I rode the electric tram downtown, took a bus up to another ski lift to get great shots of the city, watched locals play a giant chess game in the city square, and visited a Kiwi Bird park.
I would suggest seeing New Zealand in their summer in the December to February range.  The flight isn’t too bad and the next stop on the flight I took would be Melbourne from Auckland.  For my next adventure out that way I want to see Sydney to Brisbane, making sure I stop in Tamworth, the Nashville of Australia.
Jim Patterson
http://JamesGordonPatterson.com
Posted by James Gordon Patterson at Friday, June 04, 2010 1 comment: