It’s been a fun week for me, following the Arizona Wildcats athletics department and football team around Arizona.  The ten-city tour concluded with a luncheon with Coach Mike Stoops and players at Fort Huachuca, a U.S. Army post outside of Sierra Vista, located in Southeastern Arizona. 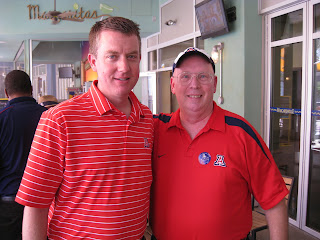 I got a chance to chat with Arizona Wildcats athletic director Greg Byrne at the three stops I made it to.  I figured Greg had to get me in doses in a few places.  All at once is too much shock, I fear. 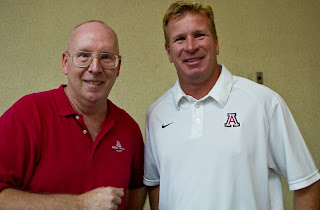 After a long drive from Phoenix, the core of our tailgate crew got together at the old NCO club at Fort Huachuca.  This is indoor lighting, a crowd, and the people are moving... a challenge for a photographer.  I adjusted ISO to around 600 on most of the shots; fast enough shutter speed so photos were not that blurry.  There just was not room to set up a tripod; plus I think I would have been tossed out had I tried!  The coach and players were very cooperative and photographer friendly, as I hope the photos show.  As a University of Arizona graduate, I was particularly proud and pleased of the players that ate lunch with us and the whole team in general.  A nice bunch of guys... people you’d love to have over to the house. 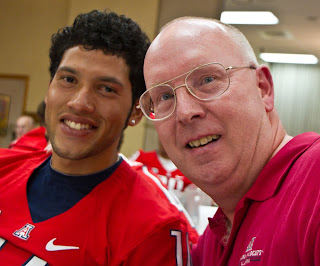 Toward the end of the lunch program, I asked Coach Stoops a silly question that probably didn’t go over as well as I thought it would.  I was sitting next to starting place kicker Alex Zendejas, who kicked the winning field goal against Arizona State last year.  We had a nice chat about his career so far and my memory of his uncle Max kicking the winning field goal for Arizona versus Notre Dame in 1982 (yup, I’m an OLD Cat!).  I asked Coach Stoops if this guy Zendejas didn’t work out as kicker if he’d consider bringing me out of my thirty-three year redshirt.  I think he thought I was a nut, because he just kind of laughed and gave me a hard time for mispronouncing  Alex’s last name!  Later at the scrimmage I asked coach where I should go on the field to work out, while I was making kicking motions. By that point, I think he got that I was just kidding.  Maybe. 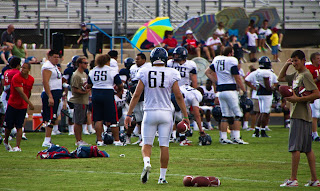 Photos of the scrimmage at Buena High School in Sierra Vista were in bright sunlight.  The problem was taking photos in part shade/part sun.  Luckily I could help adjust some of that in Adobe Lightroom 3, which I did on several shots.
Happy Shooting,
Jim Patterson
http://JamesGordonPatterson.com
My Online Camera Store
Posted by James Gordon Patterson at Sunday, August 15, 2010 No comments: