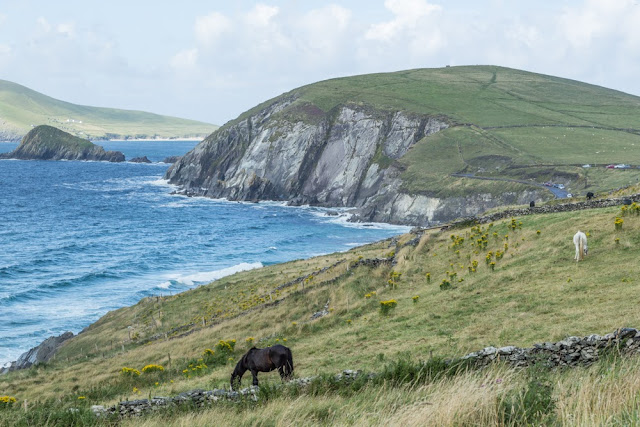 May you always have a clean shirt, a clear conscience, and enough coins in your pocket to buy a pint!

This is my third trip to Ireland.  This time I wanted to see the south and rustic and rugged west coasts of Ireland.  It was a drive and bed and breakfast adventure, booked through Sceptre Tours.  Sceptre is an Ireland specialist and I highly recommend them.

I took all photographs with my Canon 5D Mark III and 24-105mm lens.  Post editing done mostly with Adobe Lightroom 5, and some additional edits with Photoshop CS6 and some plugins.

First off, the roads are primitive.  There are a few superhighways in Ireland, but for the most part, there are two and even one lane roads with speed limits of 80 to 100 km/h, which is just too darn fast for me.  I was lucky to drive around 3/4 the speed limit and feel I had control of the car.  And, oh yes, they drive on the left and there are those horrible traffic circles or rotaries to contend with.  By the end of the trip, I was actually getting good driving on the left and using my left hand to shift.  So much so that my first night back in Phoenix, I drove out of Harold’s in Cave Creek on the left side, getting loud helpful tips on my choice of lane from some local cowboys coming at me from the opposite direction.  I’m ok now, promise!

From Dublin, we zipped south through Kilkenny and had lunch at a pub and watched the big Killkenny vs. Cork Irish hurling match.  Hurling to these American eyes is pretty strange.  They hit a ball with a stick kind of like a lacrosse stick but without the net.  One point getting it through the uprights and three points scoring a goal in the net.


Then on to spend a few nights in the lovely southern coastal town of Kinsale, just south of Cork.  First off, the Cork lads eventually won the hurling match, so all of Kinsale was pretty happy.  It was while in Kinsale, I met the Irish musical group called “Geese in the Bog.”  I included a short video with photos I took of the boys.  In the middle of the video is about 16 seconds of their music; a video I shot with my Canon 5D Mark III.  Just click on the description under their photo above and to the left to open the video.

Kinsale is a great coastal town.  Before the discovery of the Americas, it was considered the end of the world.  It’s pretty much the end of Ireland on the south coast.  Like every Irish town I’ve ever been in, it’s filled with pubs and all of them have characters and music.  I was in Jimmy Heaven.  Haha.

Short day trips from Kinsale included Cobh (pronounced “KOV”), the Titanic’s last port of call and where nearby the Germans sunk the passenger ship Lusitania back in 1915.  Also, Cork and the English Market, where two little boys were at their parent’s butcher shop for the first time.

Just northwest of Cork is the town of Blarney.  Every American knows this is where the Blarney Castle is and of course, the Blarney Stone.  I had to pucker up and give it a smooch.  Let me say this… getting to the Blarney Stone is a heck of a climb up very narrow steps.  Then you have about 5 seconds to kiss it and get a photo.  As a side note, some Irish locals in Kinsale told me that the Blarney Stone was where the help, ah ahem, relieved themselves.  Glad I didn’t lip lock on it that long.

From Kinsale, our base camp moved to the west of Ireland, a town called Kenmare.  Kenmare is right between the Ring of Beara to the south and the Ring of Kerry to the north.  A bit further north was the Dingle Peninsula.  I got to be quite comfortable at the Coachmen’s Pub in Kenmare.  Great food, great music, and great beer!  I rotated among Murphy’s, Guinness, and Beamish.  All fine Irish Stouts.

Around the Ring of Beara we stopped in the little town of Eyeries.  One of the local girls used the town water pump to get well water for the day.
From Kenmare, we went to the Cliffs of Moher, then off for a night to the tiny west coast town of Doolin, famous for attracting Irish musicians.  All the seafood was caught that day and I enjoyed some fish and chips and a wee bit of Guinness.  Guinness, by the way, is crap in the USA.  It’s too bitter.  In Ireland, oh my oh my, it is smooth and pours like chocolate milk.

From Doolin, our little car took aim from wet to east of Ireland for the town of Navan and nearby Trim, famous for the Trim Castle (where Braveheart was made) and the Hill of Tara.  It was in Navan, while at O’Brien’s pub having our final Irish dinner, that we met a waitress whose best friend from university in Galway works at Ri Ra pub in Las Vegas.  It just so happens that when in Las Vegas, I eat and drink at Ri Ra (next to Mandalay Bay) so I’ve promised to look her up when I get there in September.

Then back to Dublin airport and the six-hour flight to New York and the nearly six-hour flight from New York to Phoenix.  Whew!  Long trips, but when I look back at my photos, it was so worth it.

Here's to a long life and a merry one. A quick death and an easy one. A pretty girl and an honest one. A cold pint and another one!

…and my entire collection of photos from Ireland South and West on Flickr!