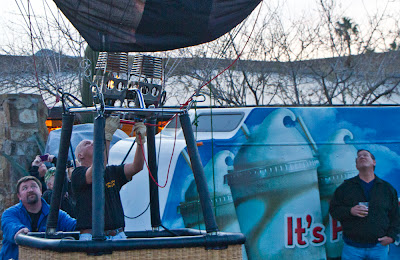 The third annual Carefree Balloon Festival hosted nearly a dozen balloons on Saturday 21 January in Carefree, just north of Phoenix.  The big excitement was one of the tethered balloons caught fire and broke loose.  Luckily the pilot was able to land it about a mile away in a golf course.  I actually discovered I took a shot of the runaway balloon while photographing one of the bands performing.  It’s one of the photos in the Flickr collection at the bottom of this blog, partially obscured by a tree.  You can tell something unusual is happening because everybody was looking away from my camera and toward the balloon.

The time of day prevented a lot of challenges for a photographer.  While there was still some light, I was able to take photographs at ISO 400.  But as it got darker, I found I had to increase the ISO or light sensitivity to 800, 1600, and then when it was really dark I was shooting my Canon 7D at about 3200 ISO. 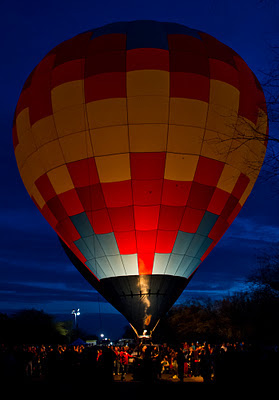 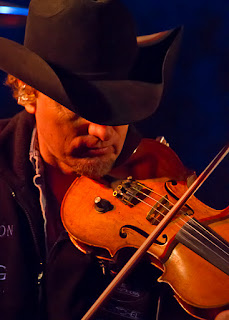 Trying to photograph the colored lights and the band was impossible at 1600 ISO.  I was using an all-purpose Tamron f/3.5 18-270mm lens that day.  Other wiser choices might have been a Canon “nifty 50mm” f/1.8 lens or even a Canon 28-135mm f/2.8 lens.  Generally speaking, the lower the f/stop number on the lens, the more light it will let in the camera.  You want the “fastest glass” possible for these evening shoots.  What about using a tripod or even a monopod?  Sure, that would enable you to take photos at various f/stops at longer exposures and lower ISO settings, UNLESS THE TARGET IS MOVING!  Then you’ll still get motion blur.  In my opinion, having a camera like the Canon 7D is the best choice because its ISO setting will go to a whopping 12800!  Now, at that high an ISO expect some noise in the photographs.  But camera technology is such that you will see many of my night shots taken at 3200 and a few at 6400 were pretty darn sharp. 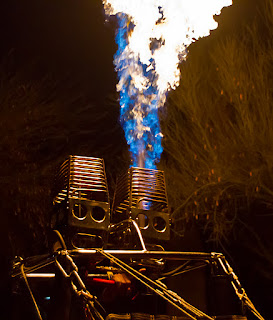 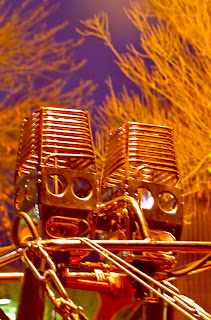 My digital darkroom or program of choice is Lightroom, where I probably do 90 percent or more of my editing.  Here, you can make lighting adjustments, do some sharpening, and control a bit for noise.  You the viewer have the final decision; are the photographs still appealing?

Locally, next up for me is the Carefree Indian Market and Cultural Festival February 17-19.  There will be live music and Native American hoop and fancy dancing, so there should be fun and colorful photo opportunities available.  Then after that will be the Cave Creek Rodeo on the last days of March.

Photos from my Flickr Site
Posted by James Gordon Patterson at Monday, January 23, 2012