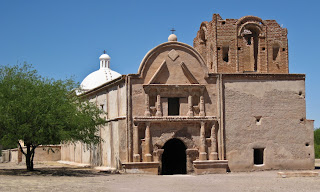 I accompanied my colleague Dr. David Rubi’s Paradise Valley Community College Spanish 245 class again for his Southern Arizona field trip of historical places... and some great Mexican food.  Why me?  I spent many many years in Tucson, first as a student at the University of Arizona, and as a resident of Tucson, working at the UA as first a reporter then instructor in the then Radio and TV Department, still later as an education specialist with the U.S. Army at nearby Fort Huachuca.  So my Southern Arizona roots are deep.
For many of our student at PVCC, located on the north side of Phoenix, Tucson seems far away, even though it is only two hours south by car.  This is a chance to show them some of the architecture, history, and culture of Tucson, a much older city than Phoenix. 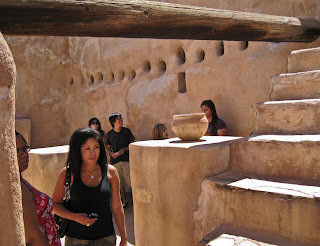 All along the way, students were exposed to the old downtown/barrio architecture.  We visited the La Casa Cordova and art museum area, the Presidio museum, La Pilita and the interesting shrine to a murdered sinner El Tiradito. 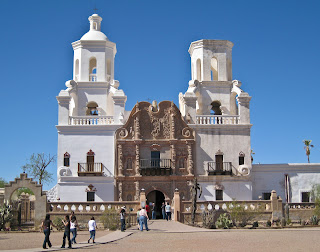 We then travelled south of Tucson to the Mission at Tumacacori then on the way back to Tucson we visited the world famous “White Dove of the Desert,” the Mission San Xavier del Bac. 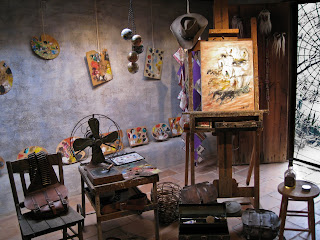 Saturday morning we went to the Ted DeGrazia Gallery of the Sun art studio, located on the north side of Tucson off of Swan Road.  We then finished our trip with a visit to the Pascua Yaqui Ceremonial Grounds. 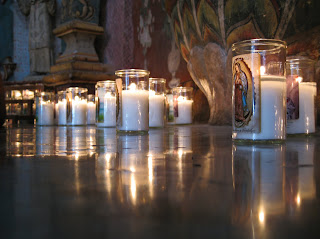 The photos you see here were shot this time with my trusty little Canon SD950.  You know my main camera of choice is the Canon 7D, but this was a trip I decided to travel light and take the little guy along.  The photos aren’t too bad for a 12mexapixal “point and shoot” that only takes jpg’s.  I edited with Lightroom.
Happy Shooting!
Jim Patterson
http://JamesGordonPatterson.com
More photos from my Flickr page!
Visit Jim’s Online Camera Store
Posted by James Gordon Patterson at Sunday, April 24, 2011