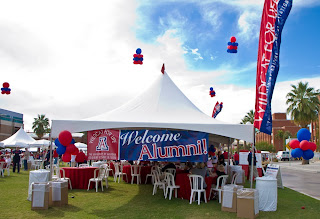 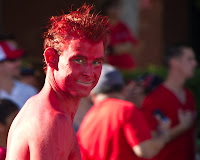 23 October 2010...  The Arizona Wildcats defeated the Washington Huskies 44 to 14 to cap homecoming in front of a capacity crowd of over 56,000.  The win puts the Wildcats tied for second place in the Pac-10 conference, 6 and 1 overall, and ranked 15th in both the AP and Coaches polls.

Matt Scott, subbing for injured starting quarterback Nic Foles, was like most of the Wildcat football team - near picture perfect.  With the exception of some sloppy arm tackling early in the game and some bizarre Pac-10 referee calls, the Cats dominated their rivals from the Pacific Northwest.

Before the game, the UA mall was filled with tailgaters and party tents.  The homecoming parade came before the Wildcat Walk of football players from Cherry and University Avenue to the football stadium.  Sadly, I missed the Wildcat Walk, but I had a very good reason:  Homecoming for our tailgate gang means STEAK!  No way I was leaving my steak behind.
Happy Shooting,
Jim Patterson